Alongside the new Huawei Mate 20 Pro comes the ‘Lite’ version, which the company has been pitching as a direct competitor to the iPhone XR.

At £379, compared to £749 for the iPhone, it’s quite a bold comparison to make – but on paper the specifications are certainly pretty close, and often comes out the winner in the specs war. 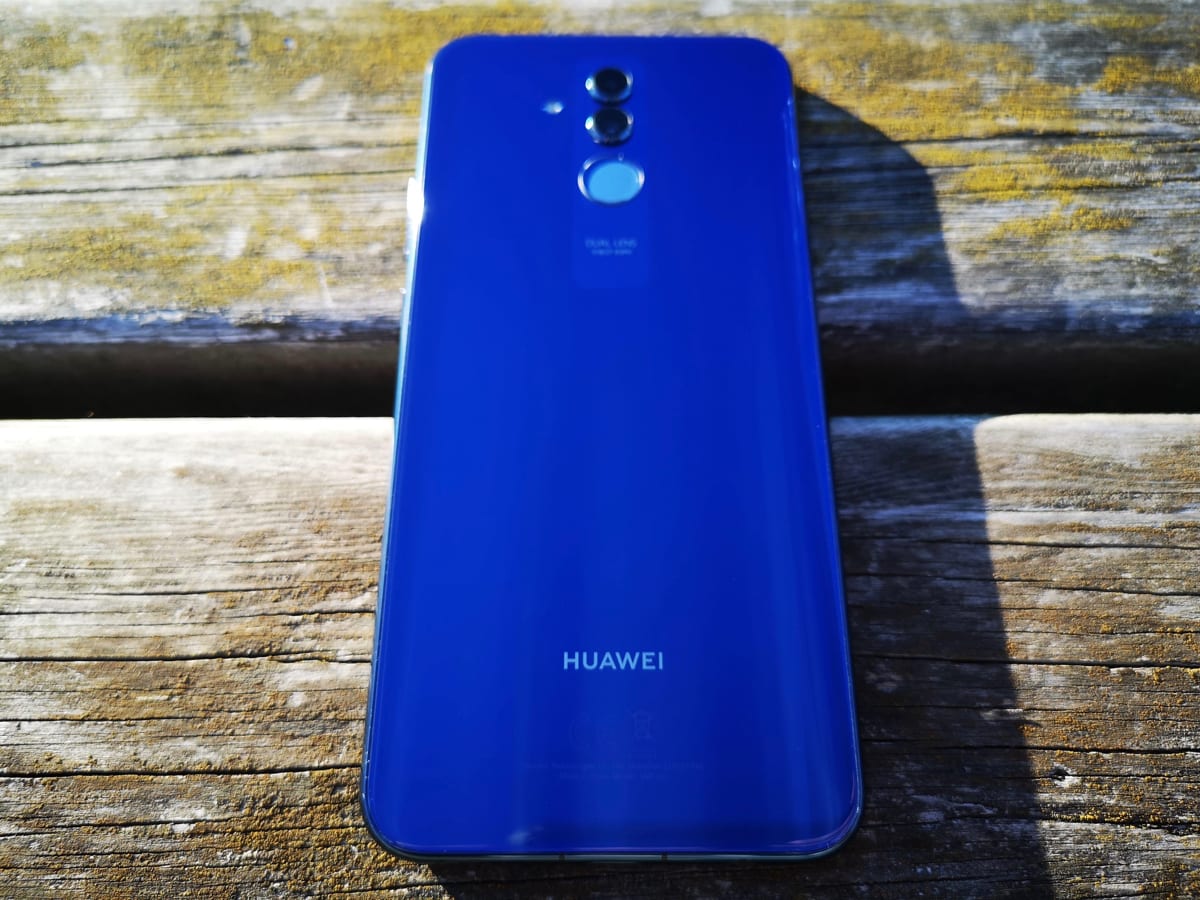 But as we know, specs aren’t everything and the question is whether the Mate 20 Lite is worth the money, especially with other models from Huawei and sister-brand Honor potentially offering even better value – such as Honor’s recently announced £229 Honor 8X, or the gaming-centric Honor Play that comes with a faster processor for £100 less.

It might be the cheapest phone in the Mate 20 series but at almost £400, it’s still not what many would consider cheap.

The Mate 20 Lite opts for a newer, but not flagship, Kirin 710 chipset. However, that isn’t really a negative because the newest chip offers better battery life and other optimisations that could in fact give it an edge. It is never laggy, and it still has the recent GPU Turbo optimisations to improve gaming performance on selected titles.

The iPhone XR makes do with a single camera front and back.

If you’re a little confused by all these comparisons, don’t worry. Huawei and Honor have been using this hardware platform to produce a number of handsets in different markets, and it really does get confusing. To add to the mix, there’s also a Nova 3 handset available in selected markets that has the Kirin 970 chipset and the same dual-camera configuration of the Honor 10. You’ll probably wish I hadn’t mentioned that – so I ask that it is struck from the record.

The screen, while not of the OLED type that comes on the Mate 20 Pro or last year’s Mate 10 Pro, is bright and vivid. At 6.3-inches, it’s only a fraction smaller than the Mate 20 Pro’s 6.39-inch display, but it only has a full HD+ resolution. Yet that’s the same as last year’s flagship and you’ll still struggle to make out the pixels.

Personally, the Mate 20 Pro could have done with fewer pixels, but Huawei probably felt it was necessary to up the screen resolution on its flagship after a number of years with a 1080p panel. 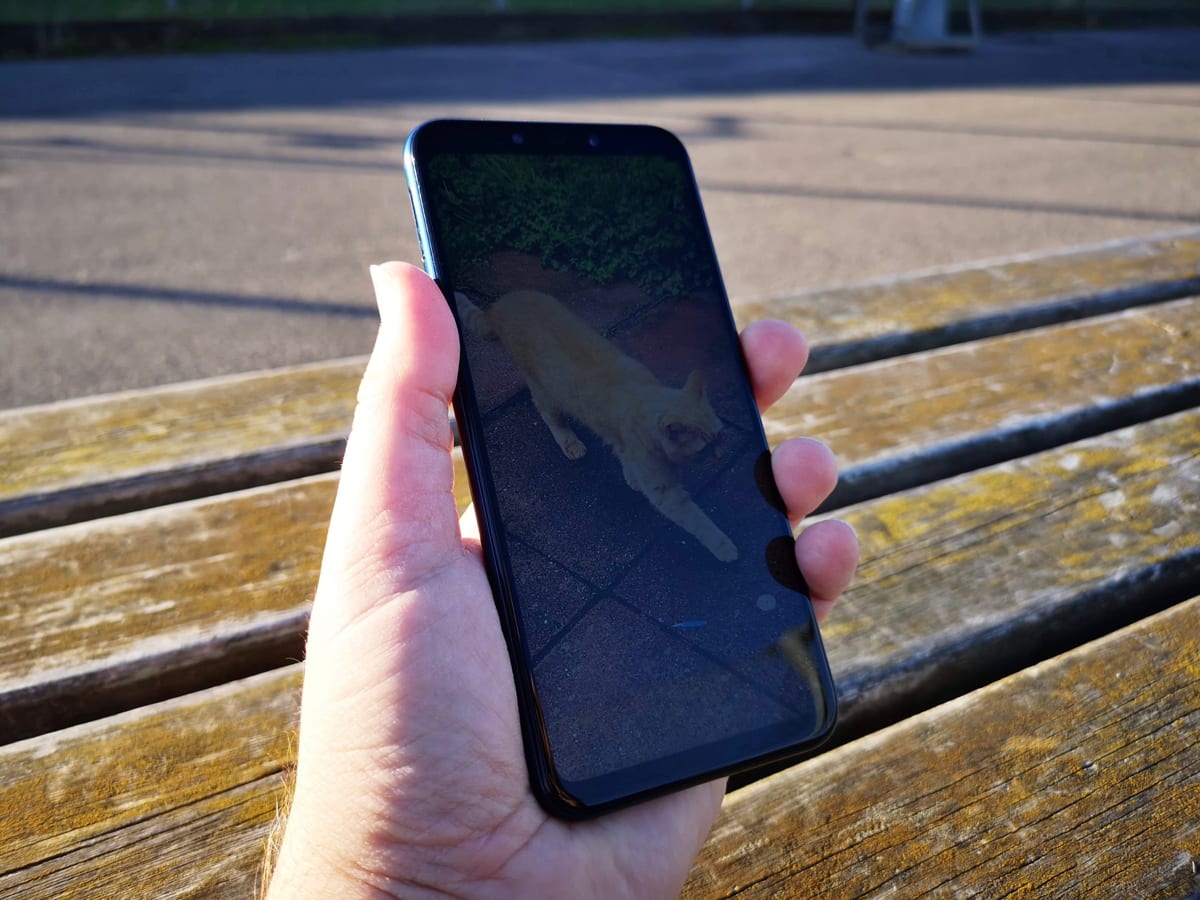 It sports a notch, but this can be hidden. Although LCD displays never go entirely black, it still pretty much disappears if you’d prefer to get rid of the notch but keep useful information occupying the space left and right of the earpiece. You can either hide the notch permanently, or on an app-by-app basis (either from a list you create, or allowing it to choose automatically based on what the app developer chooses).

The bezel at the base of the screen is reduced on account of the fingerprint sensor being placed on the back. The  Mate 20 Pro has an in-glass fingerprint sensor, but I actually find the rear-mounted position to be the most natural. It’s also very responsive and can be used to swipe down the notification bar and other gestures, if you so wish.

Mate 20 Pro users are far more likely to use the advanced face unlocking feature. On the Mate 20 Lite, you have a more basic facial unlock, which can be used no matter the rotation of the phone (obviously the camera needing to be able to see your face).

If you set it to do so, you can have the phone check for your face whenever you tilt the phone up towards your face. It’s not unique to this phone (the Honor phones above do it too), but it’s very useful. 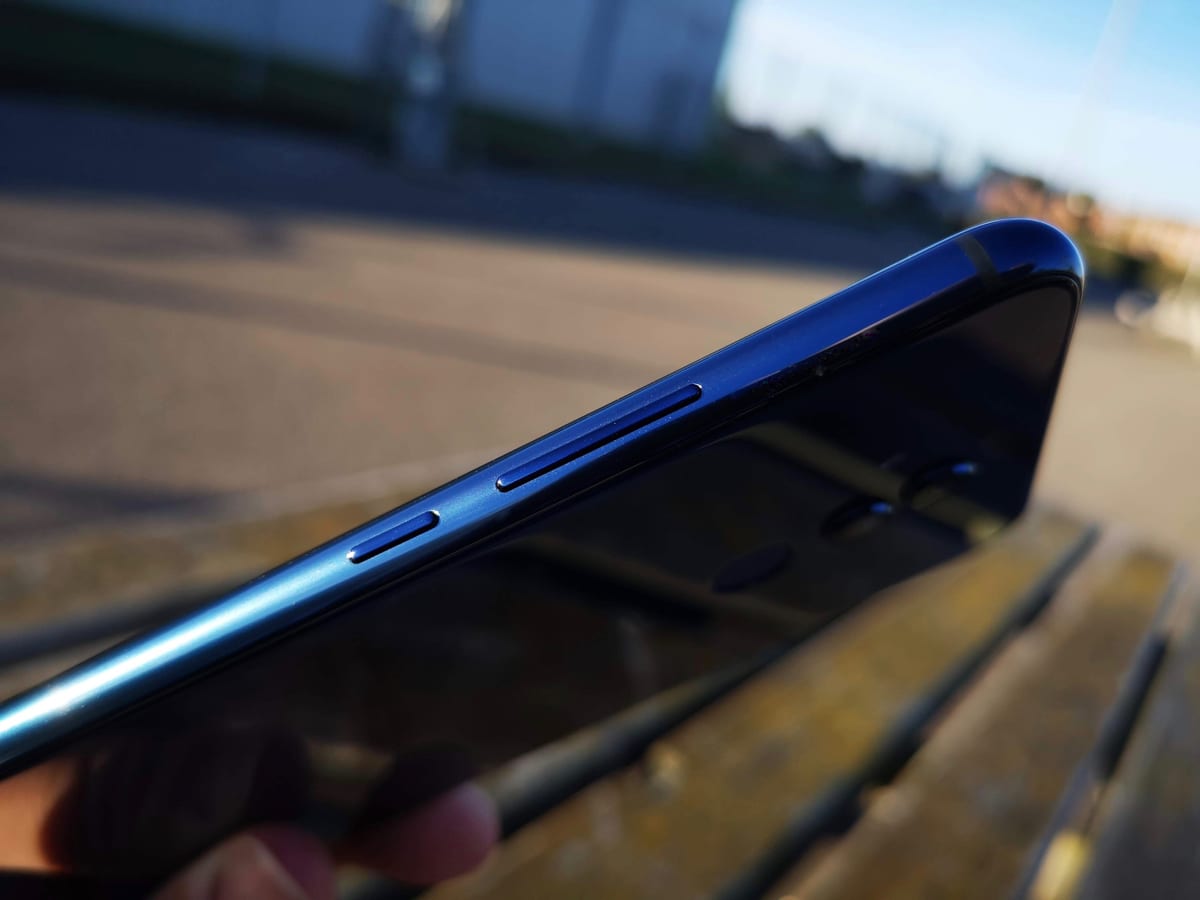 I believe the Huawei P20 Pro has had one of the best camera setups on any phone released this year, at least until the Mate 20 Pro, combining excellent close-up and telephoto photography quality, and an industry leading AI Stabilisation mode to allow long exposure photos in near darkness, without the need for a tripod.

The Mate 20 Lite retains much of this functionality, but it is clear that compromises have been made. There’s no third camera, so there’s no telephoto or ultra-wide modes.

But there are the AI functions that other models enjoy, and the phone does an excellent job of detecting scenes and adjusting the camera parameters on-the-fly.

There are also a bunch of Apple-like animated emojis that are great fun, although perhaps more fun for some people than others.

Image quality is okay, but in low-light it doesn’t do a great job. This was the same issue with the Honor Play and 8X too, and in many respects the second depth-sensing camera seems rather redundant as a lot of the effects seem to be achievable in software on other devices.

Video recording is also limited to full HD at 30 frames per second. There’s no 4K recording here, which is a strange omission.

The images on this page are reduced in size – please click on the gallery link below for the originals. 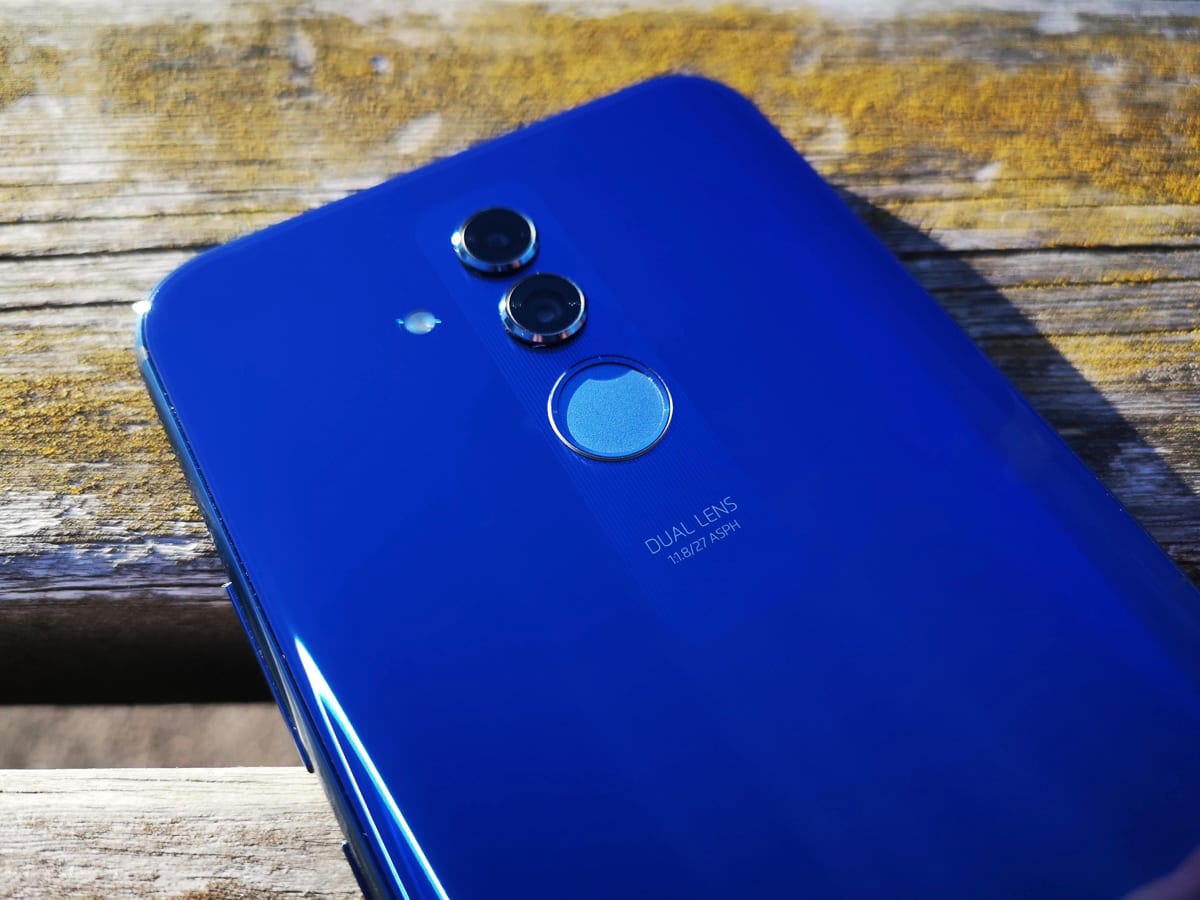 In my time with the phone, I have been left somewhat shocked at how good the battery has performed. The phone has a 3,750mAh battery inside, which is lower than the flagship Mate models, and down on the Mate 20 Pro’s 4,200mAh battery, but the chipset does a fantastic job of sipping juice.

I found it possible to leave the phone on standby for a full day with only 1 or 2% battery drain the whole time. That’s virtually unheard of (it’s worth noting, I had the same results with the Honor 8X, which isn’t perhaps surprising given it is virtually identical, bar the screen size).

And of course, it does just as well when you’re using the device (nobody buys a phone to sit it in standby the whole time!).

It’s a little sad that the phone doesn’t support Huawei’s Supercharging technology, meaning charging won’t be as fast as phones like the Mate 10 Pro, P20 Pro, and certainly nowhere near as quick as the Mate 20 Pro.

Unlike the Honor 8X, there’s a USB-C charging port here and not micro USB, plus there’s a 3.5mm headphone socket too – something the Mate 20 Pro loses to gain a IP68 rating. The Mate 20 Lite isn’t water resistant (and nor is the 8X).

The Huawei Mate 20 Lite is a very well performing phone, with a crisp display and excellent battery performance. It may sport a lower-spec processor, but it seemed to manage PUBG, Asphalt 9 (two games that support Huawei’s GPU Turbo technology) and Tekken without skipping a beat.

If this is supposed to be a mid-range CPU and GPU, you wouldn’t really know it.

It has dual-band Wi-Fi support and a Cat 12 LTE modem for 4G speeds of up to 600Mbps. While I couldn’t try it on every network, most Huawei phones now ship with universal settings for VoLTE – meaning it should work on all UK networks for 4G calling and access to all available 4G bands.

The camera is not in the same league as the Mate 20 Pro, but at £379 it is a fraction of the price. If you are happy with a camera that lacks a zoom, you’ll probably be just fine. Something I also said about the Honor 8X.

In many ways though, the Honor 8X and the Mate 20 Lite are very similar phones. Same chipset, same battery, but a bigger screen on the 8X. The 8X being a lot cheaper makes for a compelling argument to go for the Honor phone over this.

That is perhaps the real problem with the phone. There’s nothing wrong with it all, and it certainly looks and feels good, but £229 will get you virtually the same thing. What you lose is on the camera, with the 8X having only a 20-megapixel camera (plus 2-megapixel depth sensor) on the back, and a single 16-megapixel camera on the front.

If that doesn’t concern you, you’ll even be able to get the Honor 8X with a dual-SIM and memory card slot, instead of having to choose one over the other on the Mate 20 Lite – and that’s assuming you get the dual-SIM model and don’t get offered a single SIM model.

Let’s be clear; the Mate 20 Lite does have a few extras over the Honor 8X and Honor Play, but is it worth an extra £150 and £100 respectively? I am not entirely sure I can answer that, but I’d certainly be taking the time to check them all out and make the necessary comparisons before laying down any cash.