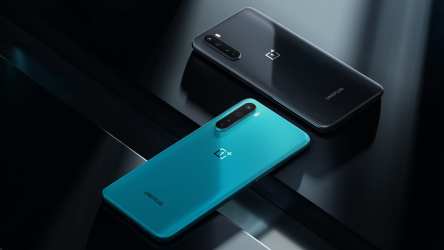 OnePlus has finally announced the Nord. Just about everything was already revealed by OnePlus over the last month, but not the price. Starting at £379, it’s way below expectations.

I have to say to OnePlus played us well. I did say some time ago that OnePlus would seek to surprise us on the day and not just release the phone at $499.99 after saying ‘under $500’ but they clearly knew the cynics would still be assuming the phone would be nearer $500 than this!

£379 for the base model (8GB/128GB) is bound to impress OnePlus fans who have been calling out for a return to more affordable pricing, but there’s quite a jump for the better equipped variant (12GB/256GB).

A £90 premium seems like quite a leap, but perhaps OnePlus is banking on its hardcore fans stumping up – especially as at £469, this might be perceived as a bargain given it could be seen as less than expected.

But I’ll leave the marketing psychology stuff to OnePlus, as I think they’ve probably put quite a bit of thought into it. That said, £469 will also get you a OnePlus 7T. Now that has thrown the cat amongst the pigeons….

Anyway, back to the phone!

OnePlus has been talking about the Nord daily for over a month, so there were no surprises left for today besides the price.

As a basic summary; the Nord comes with Qualcomm’s Snapdragon 765G chipset that makes 5G more mainstream and affordable.

It also comes with a 6.44-inch display with 90Hz refresh rate, 30W Warp Charging, a quad-camera set up on the rear and two selfie cameras on the front.

“The OnePlus Nord is an important milestone for OnePlus, as we always look for new ways to share the best technology with more people around the world. We are excited to finally bring a more accessible OnePlus smartphone that confidently stands alongside other products in the OnePlus family,

“The OnePlus Nord combines a flagship camera along with our signature features such as the 90 Hz Fluid Display, OxygenOS, and Warp Charge 30T to deliver a best-in-class smartphone experience.”

The Nord comes with the tried-and-tested Sony IMX586 48-megapixel primary camera with OIS, which has featured in countless phones from a multitude of manufacturers. There’s a good reason why this sensor is used; it’s so versatile and reliable.

On the front you’ll get a 32-megapixel wide angle camera next to a 8-megapixel ultra-wide angle camera, with a 105 degree field-of-view. This pill-shaped camera setup has featured on many Realme handsets this year, including the Realme X50 5G handset that is quite a close competitor to the Nord.

OnePlus’ Nightscape mode is available on the main and ultra wide cameras on the rear, taking nine shots at different exposures and stitching them together to produce more dynamic photos in low light.

The Nord has a 6.44-inch AMOLED display with 90Hz refresh rate, and 2,048 levels of brightness for smoother transitions and improved eye comfort.

While it offers a unique OnePlus look and feel, the experience never deviates too much from native Android – meaning new and existing users alike can get up and running with no trouble.

OnePlus has committed to two years of software (OS) updates and three years of security updates.

A phone is no good without a decent battery, and the Nord comes with a 4,115mAh battery. With the 30W fast charger supplied in the box, you can get from 0% to 70% in half an hour, and the charger design means less heat is created during charging – so you can still play games without enduring heavy thermal throttling.

An intelligent charging feature learns your usage patterns to limit the need for fast charging overnight, while the phone can also enable power saving features if it predicts your current usage will not get you to the end of the day.

The OnePlus Nord is available in two colours – Blue Marble or Gray Onyx – and two variants.

Starting straight after the launch (1530 UK time) a virtual pop-up event is taking place where you can bag some extra merchandise with your order.

Further details can be found on the dedicated Pop-up section.

If you miss out there, John Lewis will have its very own pop-up event on July 31st.

The Nord will then go on general sale from August 4th and be sold via OnePlus Direct, Three and John Lewis.

Amazon will also sell the phone, with pre-ordering starting today, and customers can elect to purchase it on 0% interest credit, paying in equal monthly instalments.

UPDATE: Amazon is also giving Prime customers a further £30 off!

The earbuds each have a 13.4mm dynamic driver and offer up to 7 hours of music playback, or 4.3 hours of phone calls, with a total of 30 hours achieved by recharging within its charging case.

The case for the OnePlus Buds supports fast charging, so you’ll never miss a beat.

The Buds support Bluetooth 5 and will be available in white, grey and Nord Blue (blue in selected markets only, including the EU).

One thought on “£379 OnePlus Nord is official; early customers can get more goodies too”