Honor has today launched a series of new products, including new watches, tablets and laptops.

A rugged smart watch for ‘urban adventurers’ and boasting up to 25 days battery life.

Using the same Kirin A1 chipset that powered the Huawei Watch GT2 and the Honor Magic Watch 2, the watch is sure to sip on the power gently while offering a wealth of features. Charging from empty takes less than two hours.

The battery can still last 48 hours with GPS enabled for the most active adventurer, and the watch supports Bluetooth 5.1 for faster data transmission and lower power consumption.

Over 100 workout modes are supported, including hiking, mountain climbing, open water and pool swimming, free training, and many more.

The Honor Watch GS Pro has a 1.39-inch AMOLED round touch display with a 454×454 pixel display. It supports animated watch faces, and weighs in at 45.5g without strap.

A smart assistant allows you to control and take photos from your smartphone, store up to 500 songs and manage phone calls via Bluetooth. You can also set alerts for severe weather, a feature that might be particularly useful given the crazy year we’ve had so far.

In addition to workout tracking, the watch also has a 24/7 heart rate monitor with Sp02 (blood oxygen) checking, sleep monitoring and a stress monitor.

Despite its small size, the Watch ES offers up to ten days battery life, and can be fully charged in 110 minutes; 70% of that achieved in just 30 minutes.

95 workout modes are supported, plus 12 animated workout courses and 44 animated exercise moves. Six workouts can be automatically detected to record your activities without user intervention.

The smart assistant allows remote photo shooting (control your phone camera from the watch), message and call reminders, plus music playback controls for your smartphone.

With a smaller 9.7-inch, 1280×800 pixel, display and a neo mint colour finish, the Pad X6 is a younger sibling that is powered by the same processor and comes in one build only; 3GB+32GB.

For cooling, there are dual fans and dual heat pipes, with a fingerprint power button, HDMI 2 output, USB-A and USB-C, plus a 3.5mm headphone port.

The MagicBook Pro also comes with a 56Wh battery and 65W fast-charging, with 50% charge achieved after 30 minutes.

Like previous laptops from Huawei and Honor, the webcam is fitted within the keyboard and can be popped up manually when required.

The existing MagicBook 14 and 15 models have now been given a bump up in specs to include AMD’s Ryzen 5 4500U processor.

The specs will vary from market to market, with the MagicBook 14 and 15 getting either 8 or 16GB of dual-channel DDR4 RAM, as well as 256 or 512GB of PCIe NVMe SSD storage. 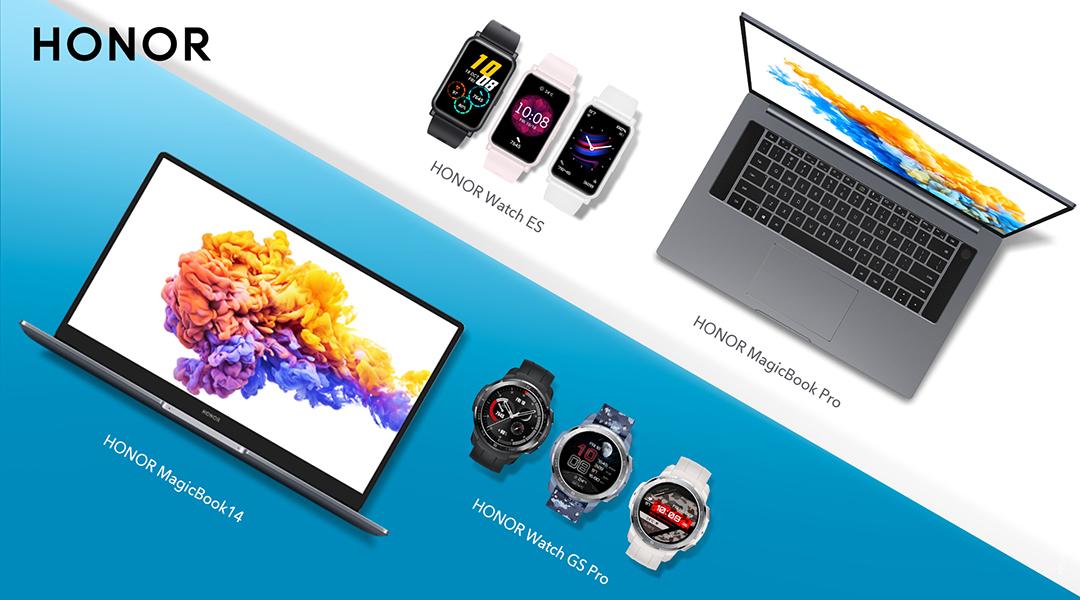 The pricing for today’s announcements are below. The table is copied from Honor’s press release.