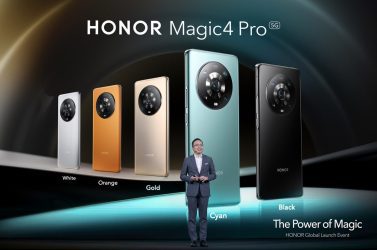 Honor hasn’t been back in the game that long, but it has now shown off its latest collection of products at Mobile World Congress, which includes a very exciting new smartphone with impressive camera tech.

With Huawei effectively out of the game for users who are heavily reliant on Google Mobile Services, having devices with similar specifications to Huawei flagships, and the addition of Android with Google, is great news – for consumers and Honor.

Top of the pile is the Honor Magic 4 Pro, which will be coming to the UK later in the year – including on contract with network operator Three.

Honor also announced a ‘standard’ Magic 4, but it appears this is not destined for the UK – at least for now..

There’s a new wearable, the Honor Watch GS 3, as well as the Honor Earbuds 3 Pro.

The Honor Magic 4 Pro comes with an extremely powerful triple-camera setup, sporting a 50-megapixel primary camera, 50-megapixel ultra-wide (122 degree field-of-view), plus a 64-megapixel periscope zoom that is native 3.5x, but capable of 100x with a digital zoom.

The phone has a massive 6.81-inch AMOLED, LTPO quad-curved display, as well as punchy stereo audio. There’s IP68 certification, and a bunch of software features to enhance photos and video (including SDR to HDR, and smoothing video motion).

There are many other features to enhance video recording, including 10-bit Log 4K video (60fps) with HDR, and AI film effects.

You can see more about the camera tech in the slides at the bottom of this story.

Another new feature is a privacy calling feature for calls, using directional sound technology to focus sound in the direction of the phone user and not those nearby. It’s not clear without trying the phone how well this works, but Honor states it can analyse the surrounding area to adjust the volume and prevent sound leakage.

Finally, powering the flagship is Qualcomm’s Snapdragon 8 gen 1 SoC, along with a 4,600mAH battery that can be charged to 100% from zero in just 30 minutes, thanks to support of 100W charging tech. That’s not just wired either, as the phone can also charge wirelessly at 100W too – being the first phone to support 100W Wireless Honor SuperCharge technology.

The Magic 4 Pro will come with Magic UI 6.0, based on Android 12. It can be purchased in a range of colours, including black, white, cyan, gold, and orange.

The original press release stated a retail price of £899, but this was later confirmed to be a mistake (and more likely the price of the standard Magic 4, if that ever comes to the UK).

It is likely the phone will cost more than this when it goes on sale later in the year. Three will also offer the phone for sale on a pay-monthly handset contract.

The new addition to the Honor watch line-up is the Watch GS 3, which comes with a new eight-channel PPG (Photoplethysmography) sensor module that detects precise optical signals.

Together with an AI Heart Rate Monitoring Engine, which combines multiple algorithms to cancel out noise during exercise, the Watch GS 3 improves the accuracy of the heart rate monitoring function.

There are over 100 workout modes supported, with precise route tracking, and the watch weighs just 44g (and 10.5mm thick) so it will remain comfortable to wear all day.

The pricing and availability will be published at a later date. The watch will be available in a choice of colours including midnight black, ocean blue, and classic gold.

The Honor Earbuds 3 Pro is the last new product. The true wireless stereo (TWS) earbuds come with a dual-driver design, including an 11mm diameter dynamic driver and high-res piezoelectric ceramic tweeter, for rich and delicate sound detail and strong bass.

The pricing and availability will be published at a later date. There are two colour variants to choose from; black or white.