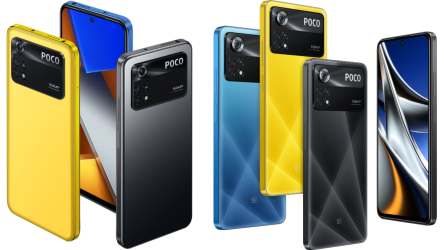 These two new handsets will be extremely good value, with pricing starting at just €179 for early birds.

On the camera side, it has a 108-megapixel primary sensor, backed up with an 8-megapixel ultra-wide and 2-megapixel micro camera.

The phone is powered by a Qualcomm Snapdragon 695 5G chipset, with a 5,000mAh battery and 67W fast-charging.

POCO X4 Pro 5G’s large 6.67″ AMOLED DotDisplay screen not only catches the eye but also operates at a 120Hz refresh rate, offering smooth and immersive true-to-life visual experience. This is the first time that POCO employs AMOLED for X-series. That, on top of the 360Hz touch sampling rate, means the smartphone responds to every movement in no time. Every scroll, swipe, or drag on screen offers less lag. And every colour is vibrant and larger-than-life, thanks to DCI-P3 wide colour gamut. The AMOLED display featuring 2400 x 1080 FHD+ resolution can automatically adjust its brightness to match its surroundings. In addition, with a SGS Eye Care Certification to boot, POCO X4 Pro 5G’s screen is softer on its users’ eyes during long gaming sessions.

POCO X4 Pro 5G has a powerful 108MP sensor at the helm of its camera array. It measures in at a massive 1/1.52″ making it one of the world’s highest resolution sensors available, which is the first time used on POCO. Paired with the sensor’s 9-in-1 binning technology, the sensor captures more light for improved clarity and brings out the most from every shot.

The device is also accompanied by an 8MP ultra-wide lens and a 2MP micro camera on the rear, while a 16MP sensor sits on the front. Whether on the hunt for the best shots while on top of snow-capped mountains, in the heart of downtown, or in the mood for a spontaneous selfie, POCO X4 Pro 5G captures every scene precisely and clearly. It comes with a range of features such as a panoramic selfie option to make sure everyone stays in the shot, no matter how big the gathering. It also offers slow motion, dual-video, time-lapse video, super macro, movie filters and kaleidoscope to breathe life and a dash of excitement to any footage that’ll be sure to be attention grabbing.

Under the hood is a Snapdragon® 695 5G processor built on 6nm production technology, bringing flagship-level speed and efficiency. The octa-core CPU is headed up by two Arm Cortex-A78 performance cores that can reach speeds up to 2.2GHz. In addition to 8GB of RAM, POCO X4 Pro 5G offers an extra 3GB transformed from the 256GB of ROM thanks to Dynamic RAM Expansion Technology, making it ideal for lag-free mobile gaming and providing a smooth, 5G-ready user experience.

And with a whopping 5,000mAh battery, users can scroll, browse, and game all day and night with more than 15 hours video playback, 25 hours of reading, 191 hours of music playing back to back. When the device finally is running low on juice, users can get back to the action in no time. Thanks to 67W turbo charging, POCO X4 Pro 5G can charge 70% in just 22 minutes — a mere coffee break — and can be fully charged in only 41 minutes. In addition, POCO X4 Pro 5G delivers an immersive entertainment experience by offering dual speakers for loud and clear stereo sound, and a Z-axis linear motor for stronger vibrations with a crisper and more accurate feedback while gaming. The smartphone also supports the all-new MIUI 13, with new features and performance improvements to optimize the user experience.

The Poco M4 Pro has a 6.43-inch display, and still retains an AMOLED screen type – the first for an M series Poco handset. It gets a 90Hz refresh rate.

On the camera side, it comes with a triple camera setup comprising a 64-megapixel primary camera, 8-megapixel ultra-wide, and a 2-megapixel macro camera.

The triple camera setup with a 64MP high-resolution main camera takes sharp, clear, and detailed photos, and is the first of its kind to debut in the M-series. Rounding out the triple set up is an 8MP ultra-wide camera for bringing the bigger moments into perspective thanks to a wider, 118° angle. While the 2MP macro lens can get up close and personal to capture spectacular shots of the micro world we rarely have the chance to see in detail. The triple camera also comes with features that empower users to capture any and every moment of their day in vivid detail including slow motion video, time-lapse video, and night mode. Of course, if selfies are a modus operandi for their social media content, the 16MP front camera more than lives up to the challenge of keeping its users looking their best.

POCO M4 Pro weighs in at just 179.5g and is 8.09mm thick, making it the lightest POCO smartphone to date. But the lighter body doesn’t mean sacrificing versatility. Rather, it’s equipped with a behemoth 5,000mAh battery that can last more than two days. Besides, POCO M4 Pro’s 33W Pro fast charging full recharges itself in only an hour — just enough time for a bite to eat. Fortunately, if time is of the essence, charge POCO M4 Pro for only 10 minutes, which amounts to a substantial two hours of video playback.

Under the hood, POCO M4 Pro carries the MediaTek Helio G96, a high-performance chipset that can handle anything a user might throw at them. While a lightning-fast 2.05GHz octa-core CPU and ARM Mali-G57 MC2 GPU gives POCO M4 Pro all the power it needs to give users the ultimate entertainment experience. But for added measure to ensure that it operates at peak performance, LiquidCool Technology 1.0 Plus is designed to keep moderate temperate, no matter how long and how frequently POCO M4 Pro is used.

If the 8GB of RAM isn’t enough, Dynamic RAM Expansion Technology enables the transfer of an extra 3GB from the 256GB of ROM. Storage can be expanded to up to 1TB, meaning it’s capable of storing a personal library of up to 500 videos, 250,000 songs, and 500,000 photos. POCO M4 Pro also comes with dual speakers for immersive sound experience, a Z-axis linear motor for responsive haptic feedback, and the all-new MIUI 13 for a stable and engaging user experience.

UK availability and pricing will be published closer to launch, but for now here are the European prices: