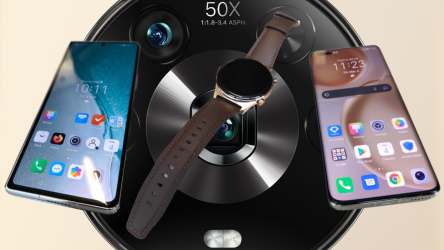 I wasn’t able to attend Mobile World Congress this year, but Honor reached out to me to come and see what I missed, while explaining why the Magic V isn’t yet on its global release plans.

Honor launched its new flagship smartphone series last week, along with a new smartwatch and earbuds. It also showed off its first foldable product which was launched at the start of the year.

I visited Honor to see some of them and came away pumped up over what’s likely to come from the company this year and beyond.

With the loss of Huawei in the global smartphone space, every phone company and its dog has been trying to gain its marketshare – with varying degrees of success – but Honor should have an even greater chance of success than most, especially with many loyal fans of both Honor and Huawei phones before the USA put them both in the Entity List.

In my opinion, the company must not simply flood the market with products. So far that’s what it seems its strategy is – hence only the Magic 4 Pro destined for a UK release. This fills the flagship spot, with the Honor 50 and Honor 50 Lite slotting in below.

As time goes on, I am sure the portfolio will grow but it seems eminently wise not to begin too fast.

So let’s look at the new products below….

Honor’s entry into the folding phone arena has started off with a quite a bang – although for now it is only being heard in China. MWC was a chance for more people to see it in the flesh, including UK trade buyers and carriers, so could this change anything?

Suffice to say, those who got to hold it in their hand were impressed (just look at the positive comments on social media). While Honor remains tight lipped about its exact plans, the company did admit the most common question received in Barcelona was relating to when the Magic V was being brought to the rest of the world.

Back at MWC 2019, with the launch of Huawei’s Mate X, Walter Ji, CEO of Huawei’s Western Europe consumer business group, said he expected prices to drop significantly within two or three years, and for foldables to be the norm within five.

Well, we’re now in the third year and prices are indeed beginning to fall. Honor’s Magic V is selling for under £1500 in China, and it has a far better design than the first-generation products like the Mate X.

For example, it closes without any gap and feels solid in the hand. The screen is on the inside, like the Samsung Galaxy Fold series, which further helps to protect the screen.

While the idea of having a screen around the outside (thus requiring just one display open or closed) was a logical one, it is quite clear that it was just too fragile to be done – at least using current tech.

On the outside is an extra large display to enable it to be used like a normal phone most of the time, and it also includes Qualcomm’s flagship Snapdragon 8 gen 1 SoC – meaning it is ideally future proofed.

The company hasn’t scrimped on the cameras either, with three 50-megapixel sensors on the rear (including an Ultra Spectrum Camera), and a 42-megapixel front-facing selfie camera.

Keeping a device with an extra large 7.9-inch display inside, and a 6.45-inch display outside, means there’s a need to offer respectable battery life. While 4,750mAh might not sound great compared to 5,000+mAh appearing on many phones today, it does get 66W fast-charging support – offering a full recharge in about 30 minutes.

So why isn’t Honor already announcing its release outside of China? Well, there are a range of factors, one of which is the need to have Google Mobile Services and applications work to get the best from the displays.

While the phone does natively allow split-screen operation, many apps (such as Instagram) do not scale properly to the aspect ratios used – an issue that affected smartphones when they moved to taller displays some years ago – and the user experience is considered paramount so as not to frustrate consumers, and potentially hinder both current and future sales.

The company doesn’t rule out importing a limited number of units before a wider launch, but it is still too early to say. For the hardcore fans, there’s also the possibility of importing a Chinese model and sideloading GMS, but that requires an acceptance of risk for when it comes to servicing and/or repair.

Given the feedback post-MWC, offers from within the UK and European markets to sell the device might help speed things up – but even that doesn’t address the user experience issues mentioned above.

Another factor is that these devices still can’t be mass produced in the quantities required to satisfy global demand – and China gets the priority for now. This decision is logical, with China not having the same software issues as we do.

It’s likely this is the same reason Oppo isn’t bringing the Find N here yet either.

All Honor would commit to saying is that before the end of the year, it will have a folding product on sale here. It’s possible that this could actually be a different, newer, device – or even a different form factor entirely (e.g. a flip).

Naturally, I wasn’t about to be told exact plans, but it did demonstrate Honor’s commitment to foldables and that we’re not being forgotten on purpose. Like so many things in life, it’s complicated.

Perhaps with Google rumoured to be working on its own foldable, Android 12L being designed for larger displays, as well as Android 13 in development, we might see the software catch up to make foldables less proprietary.

As Honor split from Huawei, it stands to reason that many products within the average 18 month development cycle are still strongly based on designs from its former parent company.

This means the Magic 4 series, announced at MWC last week, has more than a few similarities to the Honor Mate series, in particular the Mate 40 Pro.

But let me say this straight out: This. is. a. good. thing.

When the sanctions against Huawei kicked in back in 2019, it effectively killed the P and Mate-series phones – ranges that both absolutely dominated the space when it came to mobile photography.

Even today, the P30 Pro remains able to compete with current flagships for photo quality, even if it is found lacking when it comes to video recording and 5G.

If the Mate 40 Pro had been available with Google services, chances are a lot of people reading this would have one. Ditto for the P50 Pro.

With Huawei effectively out of the equation in mobile, Honor can now step in and clean up – something it clearly hopes to do with the sub-£950 flagship Magic 4 Pro.

It has all the key ingredients:

Best of all, it has full access to Google Mobile Services, Play store apps, Google Pay and everything else.

Last year at the launch of the Honor 50, Honor stated we will see more unique designs on products coming in the later half of 2022, but I’m very excited by the Magic 4 Pro right now.

It has all the ingredients necessary to step in where Huawei left off, and I can’t wait to see it when it arrives in early May. In addition to being available SIM-free, the Honor Magic 4 Pro will also be available on contract with Three.

Note: As of now, the gold model is not destined to be released in the UK.

Honor’s new wearable might seem like much of a muchness when it comes to wearables. If smartphones are struggling to innovate (excluding the foldable variety), think of how much you can do with a watch.

But, the Honor Watch GS 3 has one ace up its sleeve – and that is in its thinness. At just 10.5mm thick, it won’t stand out as far on a wrist; something that has put a lot of people off smartwatches in general.

Yet, despite the thinner chassis, it can still offer the same battery life of its predecessors – around 14 days or more in certain modes.

There are three colour designs (the watch I saw was the classic gold) which each come with their own strap:

The Watch GS3 supports over 100 workout modes, with auto detection of six of them. This is accompanied by 12 animated fitness courses and 44 standard demonstrations.

The heart rate monitor has an eight-channel PPG 5.0 sensor, with an AI Heart Rate Engine to enhance accuracy.

The watch communicates with your phone via Bluetooth LE (no Wi-Fi or LTE/NR), and has integrated GPS. The AMOLED display has a resolution of 466×466 pixels.

It’s obviously not possible to pass any more judgement without using it for a while, and even less so on a model that wasn’t paired to a device, but this is about first impressions – and you can see for yourself in the photos that it is very appealing looks wise.

One thought on “Hands-on with the Magic V and Magic 4 Pro, plus Honor hints at when we might see a foldable in the UK”