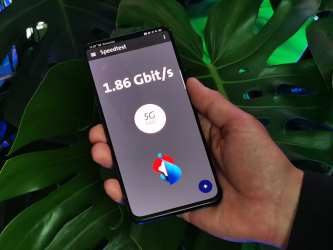 Oppo has announced the Reno 5G handset in Zurich, Switzerland, as one of the key launch devices for Swisscom’s pending 5G network launch.

The announcement coincides with the Chinese announcement of the Oppo Reno handset portfolio, which will be launched officially in Europe on April 24th.

Swisscom’s 5G network promises to have coverage in every Swiss city by the end of 2019, which sounds implausible until you learn that the network is combining the launch with both new dedicated 5G equipment, as well as upgrades on its existing Ericsson 4G network that can be done with little more than a flick of a switch.

To do this, Swisscom is also utilising existing 4G spectrum in addition to using dedicated 5G spectrum.

This shared spectrum enables the network to offer 90% population coverage by the end of 2019, with speeds of up to 2Gbps being advertised initially.

This is just as well, given research carried out by Swisscom showed that people under 25 now use 8x more data than previous generations. As a guide, data volumes that were once transferred in a week in 2014 are now exceeded in just half a day.

Once the concessions are signed, 100 sites in more than 50 cities will be switched on.

This does mean Swisscom was not able to give an exact date for 5G to be launched, but the network is pushing ahead with the launch of its new handsets and tariffs that will go on sale in May. It does at least mean that customers will be good to go without having to do anything after signing up.

Besides the Oppo Reno 5G (see below), other handsets available will include the LG V50 ThinQ, Samsung Galaxy S10 5G and the Huawei Mate X (the latter due in Q3, with a price approaching £2000).

Swisscom’s 5G network will be made up of two elements, called 5G-fast and 5G-wide.

5G wide, which will cover the whole of Switzerland uses spectrum sharing. 5G fast will be available on a more selective basis, with the fastest possible speeds.

Beamforming, as part of 5G fast will bring more efficiency, as well as lower exposure. Swisscom noted that per data byte, 5G is 1000 times lower in energy consumption than 2G.

Another offering will include a home 5G router, with an external antenna, offering the benefits of low-latency 5G in the home (or office).

All eyes must now be on the likes of EE, Vodafone and Three here in the UK to find out when we will be able to get a taste of 5G.

The Oppo Reno 5G is part of a new portfolio of Reno handsets that will be coming to Europe in May, and the 5G model I saw will be the flagship model.

To offer a full-screen display without bezels or holes (and giving it a 93.1% screen-to-body ratio), the Oppo Reno 5G has a pivoting camera that rises out of the phone (similar to the motorised camera on the Oppo Find X).

The phone has a 48-megapixel main camera on the back, plus a periscope zoom that combines with the main camera to offer a 10x hybrid zoom. There’s also wide-angle photography available too, giving a similar camera experience to the recently launched Huawei P30 Pro.

As you can see in the video, the zoom function of the camera is impressive and that motorised selfie camera is a great way to solve the issue of how to offer a front-facing camera without impacting on the display.

The Reno 5G also boasts ultra night-mode photography, although I was unable to test this feature out.

Powered by a Qualcomm Snapdragon 855 chipset with X50 5G modem, and a 4,065mAh battery with VOOC Flash Charge 3.0, the phone offers a flagship specification with a battery capacity to match demand.

This is in stark contrast to some of the other handsets announced with Snapdragon 855 that have seen battery capacities reduced. However power efficient a chipset is, if you want to enjoy watching movies, taking photos or playing games, a big battery will always win out.

It also runs on the latest ColorOS 6, sitting on top of Android Pie.

At the launch event , I was able to perform a 5G speed test on a real, live, network.

No labs, no simulations: A real handset.

I achieved speeds in excess of 1.5Gbps, while the highest recorded speed test performed by Swisscom itself was 1.86Gbps.

Suffice to say, I was quite impressed.

Lower latency (sub 1ms) is one of the key benefits of 5G over 4G, with plenty of benefits for industry, but Oppo was also demonstrating cloud gaming with Shadow.

Gamers can use 5G to stream games without any delay, which will particularly benefit those playing driving, shooting or fighting games.

5G isn’t of course just about faster gaming on handsets, as with 5G broadband in the home, you’ll be able to benefit from faster online gaming through a PC or console (including the upcoming Google Stadia platform).

The Oppo Reno 5G will be available to buy in Switzerland from May, with other markets receiving the handset in coming months. Oppo was unable to give any more information ahead of it’s dedicated European launch event on the 24th April.

It’s at this event, which I’ll also be attending, where we will learn about all the new models coming to Europe, including the colours on offer, pricing and network availability.