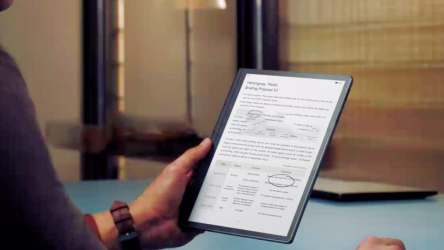 Huawei has already announced new smartphones and wearables, but at MWC today it chose to talk of its new range of smart office products.

Some of the following products have already been announced, or are even on sale, in China but the company has now come up with list of things that will be coming to a global market.

In addition, the company also announced some software updates for existing products, like enhancements to its Super Device data sharing service, coming soon to all Harmony OS and EMUI 12 devices, as well as news for MateBook users running Windows 10, who will soon be able to run Android apps, via the AppGallery, meaning it is no longer a feature exclusive to Windows 11 users.

Free Touch Creative Gestures, taken from the smartphone industry, allows more control from the touchpad – including swiping up and down on the left-hand side for screen brightness, up/down on the right for volume, and a tap of the knuckles for a screen capture.

The keyboard is a full-size accessory, with 1.3mm key travel and 110-160 degree stepless adjustment.

Huawei also launched the new Glide Keyboard, making for a true-laptop experience by giving a solid, stable, structure that can be held steady with one-hand, and actually used on a lap. The keyboard also has backlighting.

The near invisible interface at the rear hides 2 USB-C, 2 USB-A and 3.5mm headphone jack, making it look as sleek from the back as it does from the front.

Hardware wise, the MateStation X comes with 16GB of RAM, 1TB of storage, and near silent cooling (<20dBA).

Perhaps the most exciting product for my own personal interest is the new E Ink MatePad Paper, which comes with a narrow-bezel 10.3-inch display, and smart refresh mode for multiple usage scenarios – even video playback.

Despite having just 16 greyscale levels, it can adapt the image to give the effect of 256 shades – as well as sharpening text. With more screen real estate, there’s less page turning for reading books.

But this isn’t just an e-reader, as it is powered by Harmony OS and can run apps, as well as being incredibly productive in meetings – being able to capture audio while annotating, with the ability to bookmark points within a speech for easy recollection later.

The MatePad Paper is compatible with Huawei’s M-Pencil, and handwritten notes will be converted to text.

As it runs a proper OS, you can also manage files on the MatePad Paper with a smartphone or PC, as well as keeping things secure with a fingerprint power button built-in.

The best feature of eInk is battery life, and the MatePad Paper can be kept on standby for as long as four weeks between charges.

The MatePad Paper comes with 4GB of RAM, 64GB storage and Wi-Fi 6+ connectivity.