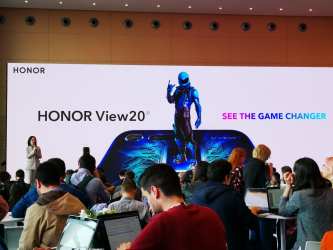 The View 20, which I reviewed last month will get an update that takes things beyond the current GPU Turbo offering, and promises an energy efficiency boost of 20.34%.

As a result of the Gaming+ upgrade, Fortnite Vulkan version can also be supported on the Honor View20, bringing gamers a faster and smoother experience. In addition, popular mobile games such as QQ Speed and Arena of Valor have been optimized to support the high definition feature. Gamers can now experience greater clarity and capture more details.

Honor is also collaborating with Epic Games to enhance the gaming experience of Fortnite, and View 20 owners will have exclusive access to the Fortnight Honor Guard outfit, from 25th February 2019 on the HiHonor website.

Honor also announced a Phantom Blue edition of the Honor 8X, while humble bragging that the extremely affordable phone has currently sold over 10 million units since it went on sale in late 2018.